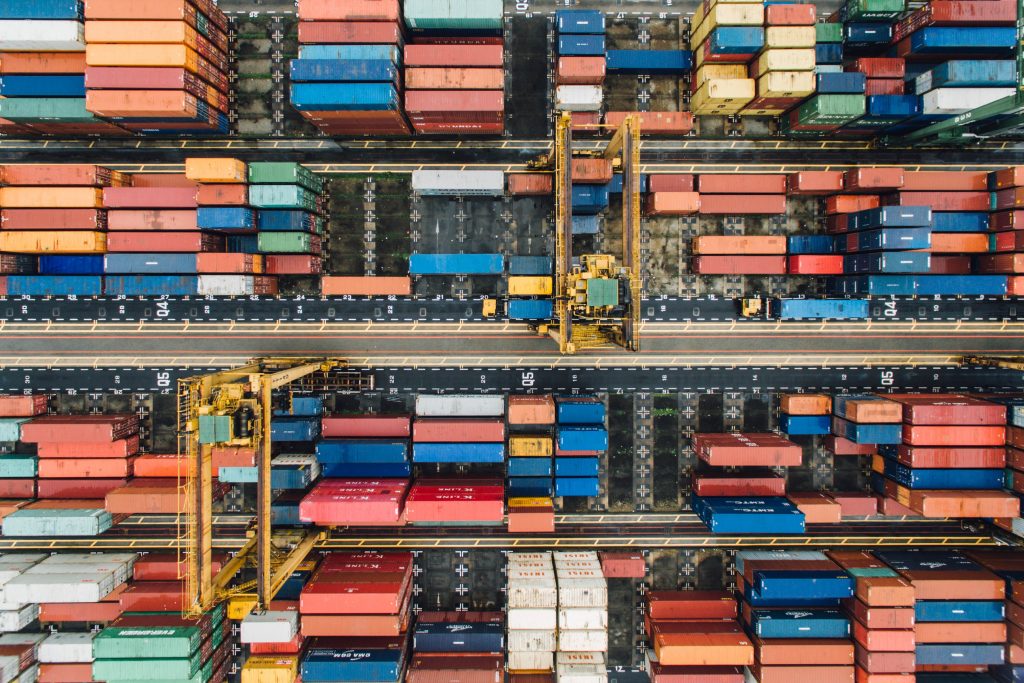 The global supply chain crisis has been in the news for months, but the crisis is not limited to the UK and will be in effect for some time to come. If you have been trying to buy furniture, bicycles or computer hardware you will have noticed a longer waiting time and higher prices than before the pandemic. A recent survey amongst retailers in Germany has shown that 100% of bike shops, 99% of hardware shops and 74% of retailers overall experienced supply shortages during September. The good news is that we are currently experiencing a ripple effect that will eventually flatten out. The bad news is, that our global supply chain is fragile and different crises will continue to affect the supply chain if the network as a whole will not become more resilient.

The supply chain in itself is highly intertwined and complex, so it is unsurprising that there is no single point of failure but an array of interactions at various points in the chain that cause shortages, delays and an increase in prices. With that being said, it is undeniable that Covid has played a significant role in exacerbating many of the existing issues. During the first six months of the pandemic and at the height of uncertainty, global shipping plummeted. After people settled into their home offices and realized that most of their free time and social activities were off the table for the foreseeable future, they started to spend their money on things that they could easily order online. The global supply chain had been operating with seasonal surges in demand, especially in preparation of the holiday season, but suddenly every month had been peak season. It is a little-known fact, that passenger planes have been carrying one third of all cargo. After commercial flights had been reduced to an absolute minimum, that cargo was now hastily transferred to container shipping.

Container shipping had been the backbone of international logistics for decades and a driver for globalisation. When the first container ship left port in 1956, it started a revolution. The metal boxes these ships carried allowed to transport more cargo, massively increased the efficiency of shipping and arguably stitched the global economy more than even the internet together. With the sudden surge in consumer demand, containers themselves became a hot commodity. The issue was not the number of circulating containers, but the fact that great numbers were either stuck in the wrong places or were used as temporary storage. Logistics is global. With fewer empty containers making their way back to Asia, fewer containers and ships were available for exports. This caused shipping prices to skyrocket from around $4K to up to $20K for a single container. Additionally, even if a container was available, there was no guarantee for an immediate spot on a container ship, causing further delays. The global shortage of ships and containers was further increased in March 2021 when the Ever Given got stuck in the Suez Canal causing a greater number of ships to strand out at sea.

When a container ship finally reaches port, it will face yet another hurdle. The majority of ports suffer from congestion and ships have to wait days or even weeks for a chance to dock and unload their cargo. Much of the congestion is caused by Covid precautions. Many ports have mandatory quarantine periods and PCR tests, and cargo operations are not allowed to proceed until there are negative test results. Mandatory quarantine can last between 14-28 days in Chinese ports. After a Covid outbreak in one of the busiest Container Terminals in China, the Chinese government mandated ships to anchor and wait as part of its measures to control the outbreak. The general scale of the operation is another cause for congestion. During the last 10-15 years, ships have doubled or even tripled in size, take much longer to unload and need more infrastructure, especially trains and truck. This has been aggravated by a continuing labour shortage, especially after many workers were either laid-off or left the profession during the first few months of the pandemic. The truck driver shortage has especially become a critical issue in the UK, but the situation is only slightly better in the rest of the world.

The problems for the global supply chain do not end there. Extreme weather events have caused massive damage to infrastructure in the past years, but there has been little progress in resilience planning. Out of 300 ports in the United States, only 10 have gone through such a process. While ports are generally more resilient against sea level rise, port operations and connected infrastructure such as railway networks, roadways and the electrical grid are still vulnerable to hurricanes or coastal flooding as previous cases have shown. In case of such an extreme weather event, the impact on an affected port would put additional stress on an already stressed system as ships would need to be rerouted causing further delays and congestion.

Finally, the reliance on a functioning supply chain, spreading product assembly across various markets and maintaining low cost through minimal inventory has created a precarious system. For consumers this has been evident in the drop of available computer hardware, monitors or furniture. The shortages can be traced back to miscalculations, factory closings due to Covid outbreaks and climate change. Many industries are not receiving needed supplies, which has caused a pipette shortage in the United States. When demand for pipettes soared because of Covid-19 tests, the Texas Freeze broke a critical link in the pipette supply chain. Due to power outages, several plants that produced polypropylene resin – the raw material for pipette tips – had to shut down, affecting 85% of the US production capacity and causing shortages in hospitals all over the country. The worldwide semiconductor shortage is another example for industries lacking a critical component. Semiconductors are a critical component in automobile production. Some of the largest producers have already announced that they would produce 80-100K cars less than expected. Among those affected are also producers of heavy-duty trucks, which have ironically been ordered to mitigate some of the negative effects of the global supply chain crisis only to fall victim to them.

Despite the many challenges the logistics sector faces, the current state of the global supply chain is a still good news. It has not come to a standstill. Despite delays, products keep moving across the world. Since the start of the pandemic carriers, logistics providers and supply chain managers have been excelling at being resilient and continue to find solutions in a chaotic environment. The bad news is that the system is highly complex and fragile. Even if the ripples even out eventually, there will be new challenges and further disruptions ahead. The current model of minimal inventory and spread-out production sites will not be sustainable as long as the stress on the system continues to grow.