Taking notes is an important part of the learning process. It helps to organize the information and comprehend more easily the important parts of an essay or a lecture. Keeping track of the flow of information can be challenging because everything might seem important and students can be
distracted and do not know on what exactly they have to focus on. This guide will propose some easy solutions on keeping the student’s focus on track and ease the process through some simple methods of notetaking for lectures and essays. Let’s go on and introduce some methods. 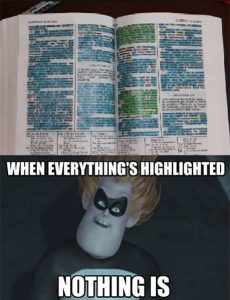 Be careful about what you highlight. When everything is highlighted nothing is! It is harder to distinguish the important aspects of an essay just by considering everything important.

In each paragraph try to comprehend the central idea of it. This is usually within the first sentence of a paragraph. Highlighting the central idea/opinion will help you understand the meaning and will bring back to memory the rest of the details. Usually, this is within one-two paragraphs not more

Learning is a process that needs the use of all our senses. It is not all about reading an essay and trying to memorize it by heart. Try to write down some aspects as subtitles for each paragraph. Organize all the sub-titles in a small text that will create a small summary for the whole essay.

When the main idea is completed read the summary again. This time get back to more details of the essay. Write down useful details as additional notes to the main body of the summary.

Highlighted above are the central ideas of an article dealing with the European Cybersecurity Framework. The development of the central argument is visible within the rest of the paragraph’s body. After understanding the message that these paragraphs want to transmit to the reader we create two small sentences that will be part of the summary.

“The European cybersecurity approach is under criticism despite efforts of harmonization through the internal market rationale that E.U. adopted because the process of harmonization is not simultaneous to all policy domains. The EU’s resilience-based approach for cybersecurity is served adequately through the market rationale to set EU a digital norm builder.

For more instructions on referencing check the guide here. 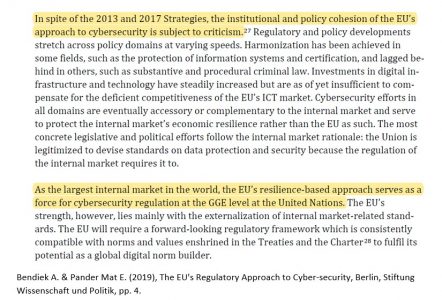 The way for notetaking for lecture is quite similar with essays. Again the student has to extract the most important aspects of the lecture by critically thinking what is more important to remember and slowly start building on this basic knowledge. In that case it would be useful to:

1) Is under criticism for its harmonasation shortcomings

3) EU seems as a global digital norm builder through the market externalization.

“The European cybersecurity approach is under criticism despite efforts of harmonization through the internal market rationale that E.U. adopted because the process of harmonization is not simultaneous to all policy domains. The EU’s resilience-based approach for cybersecurity is served adequately through the market rationale to set EU a digital norm builder.”

As previously stated the means for notetaking is the same with essays. Try to choose what is faster in the case. It is important to write down anything of value while the lecturer is presenting!

An easy to use software is Microsoft Sticky Notes.

There are many other software online ready to help students with note-taking.

Get a regular Email Newsletter with latest information