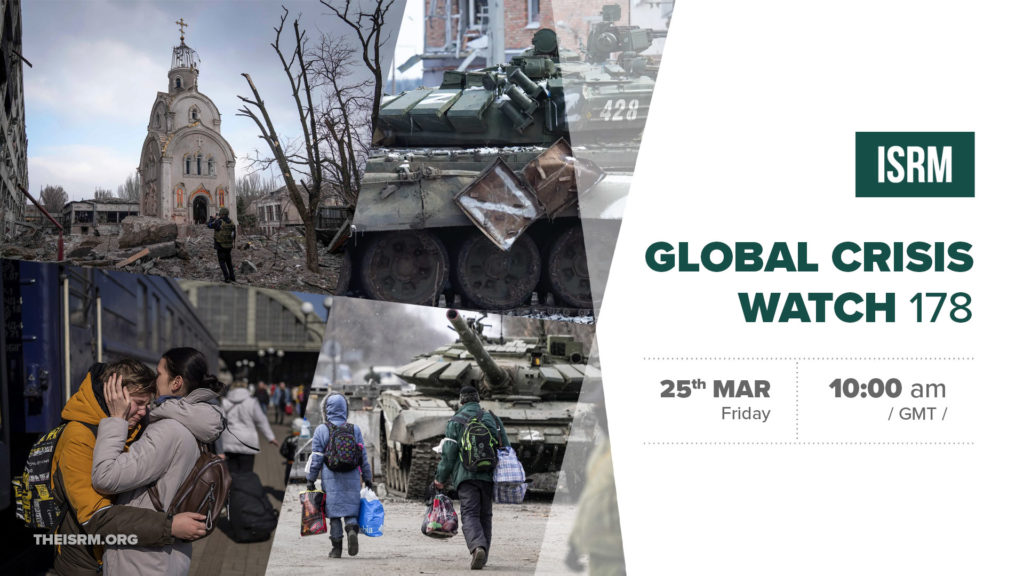 This week, the war in Ukraine will have been fought for over a month. What was initially expected to be a short invasion that would last mere days and end with total Russian victory has not only exposed colossal mismanagement and ineffectiveness of Russia’s army and the devastation and horror it brought with it, but also put an end to the post-Cold War world order. The Russian invasion has global consequences and with every day of continued fighting there will be more and more of them. For the last four weeks, there have been countless news reports, opinion pieces and commentaries on every imaginable aspect of the war. Countless observations have been made, lessons are learned and key takeaways are expressed now that the shock of the first days of war is waning off.

When the war started on February 24th few expected Ukraine to hold out longer than a couple of hours, maybe days. After a major build-up over several months, Russian forces seemed intimidating and were expected to achieve air superiority, wage superior combined arms warfare and simply crush through the Ukrainian defences forcing Kyiv to surrender within two or three days. The opposite happened. After four weeks, there is still a Ukraine Air Force, and air defence systems are still posing a threat to Russian aircraft. Russian tanks are stuck on roads, in fields or forests after running out of fuel or abandoned by their crews. There are reports of widespread frostbite in Russian troops and they have been spotted wearing looted Ukrainian combat boots, which has been a sign of a poorly equipped army throughout the history war. The Russian advance has largely halted, and Ukrainian troops have started local counter-offensives, with one seemingly threatening to encircle a large Russian force northwest of Kyiv around Irpin, Hostomel and Bucha. The news is that there is currently a stalemate but that the war could still go either way. However, this is no longer David against Goliath. Ukraine should by no means be treated as an underdog. Russia has not yet achieved any of its war goals and suffers from massive supply issues and international sanctions. Its weapon manufacturers can no longer produce tanks due to a shortage of components, which could soon impact on other systems also dependent on imports. Meanwhile, Ukraine has the massive western military industrial complex on its side, providing, ammunition, kit and weapon systems that wreak havoc on the Russian military. Its army has been trained to Western standards by US, British and Canadian units and is fighting a highly effective defensive war. It is becoming clearer by the day that the Russian military is receiving unsustainable casualties and cannot defeat and occupy Ukraine in its current state.

Unfortunately, that is not good news. Unable to gain ground, Russian forces have started to wear down the Ukrainian defenders with massive artillery shelling and air raids. While this provides limited military success, it inflicts massive damage to civilians and civilian structures, wiping out large single structures, whole city blocks and even small cities. This is neither new or shocking as the same tactic has been used in Grozny (Chechnya) and Aleppo (Syria), bombing both cities into rubble to break resistance. In Ukraine, it is Mariupol, a once thriving port city in southern Ukraine and the remaining obstacle to connect Crimea to the Donbass region and establish a land corridor. Until a few days ago, two Associated Press reporters were still reporting on the ground documenting the horrendous results of constant artillery barrages, urging the world to look at the atrocities. They documented the suffering in pictures of dead children lying in hospital basements, mass graves and frozen bodies on the street. A city theatre, a school and several hospitals where hundreds of civilians sought shelter were shelled. At least half of the pre-war population of 450,000 has now fled the city, most before the attack, many more through the humanitarian corridors. The fighting and suffering in Mariupol will continue as Ukrainian forces rejected calls to surrender, even though the city has been cut off from water, electricity and other critical supplies for weeks. If Russian forces manage to encircle another city, this is the magnitude of devastation that can be expected. As in every war, those that are affected most are civilians. 10 million Ukrainians, a quarter of the whole population, have now been displaced, with 3.5 million of those seeking shelter as refugees in other countries.

Besides the horrific consequences of war there are other observations that can be made that will have direct consequences in the coming years for military planners and policy makers around the world. The first one is the significant change in battlefield tactics and effectiveness of weapons systems. The age of the tank has come to its end. Introduced in the First World War and being part of massive and decisive battles throughout the last hundred years such as Cambrai (1917), Kursk (1943) or the Golan Heights (1973), the once celebrated combination of speed, armour and fire power seems to have been rendered obsolete. One of the most frequent pictures from the war in Ukraine has been knocked out tanks. Modern anti-tank weapons can easily incapacitate or destroy tanks and other armoured vehicles and are produced relatively cheaply and are available in abundance. Agile, well-equipped infantry units with drone support have continuously outflanked and engaged tank units and armoured columns. With massive production costs of tanks and their diminishing battlefield efficiency, armies need to re-evaluate their use. This is also part of the digitisation of war. Ukraine has effectively used readily available commercial drones for reconnaissance and to identify and strike command posts. It has tracked phones and GPS data to engage senior Russian military personnel or send messages to Russian soldiers asking them to surrender. It remains to be seen how cyber-attacks will influence the conflict and while there have been no reports so far on a wider effect on critical infrastructure in Ukraine, websites of government institutions and companies in Russia and the US have been under constant probing and attacks.

The second one is the information warfare that has been going on. The war is not only fought in the field but also through pictures. As a former actor, President Zelensky understands the power of imagery and has proven to make most use of them in how he presents himself nationally and internationally. His decision to stay in Kyiv in the early days of invasion, showing defiance in the face of an impending attack on the capital and strengthening the unity of the Ukrainian population have all contributed to put him on a pedestal with other great war time leaders. His international appearances have helped him in garnering sympathy and support for the Ukrainian cause. Even if he knows that there is no possibility for a No-Fly Zone, his continued request for it both rallies public support and basically forces his western partners to offer something else in order to not lose face and be accused of indifference. There will be no lecture on leadership that will not mention his name for the foreseeable future. The rest of the Ukrainian information campaign has been equally effective by turning the war into what commentators have described as a spectacle. The Ukrainians have become a team everybody cheers for and if all the bloody and grim consequences of war could be removed, the conflict would be close to a prime-time show, with clearly defined characters, story arcs and cliff-hangers. On the other side, the Russians have also launched a massive disinformation campaign about Ukrainian biological and chemical weapon facilities, using crisis actors to portray Russian war crimes and a fascist Ukrainian government that plans genocide, to name a few of their central themes. In Russia itself the media is tightly controlled by the state, and more and more platforms are banned for ‘extremist views’ that could distort the official narrative from the Kremlin, the latest being Instagram and Facebook.

The third and for now final observation is that there is still no viable exit strategy. The military losses and international isolation have put Russia into a corner it cannot get out without being humiliated, prompting the possibility of further escalation by declaring that there is always a nuclear option. Russia is running out of allies as there is now a growing reluctance to support Russia. The anticipated closer political partnership with China has seemingly been put on hold as Xi Jinping’s government has announced that the war is in nobody’s interest, especially not China’s, who has strong economic relations with both Ukraine and Russia. Diplomatic peace talks have made little to no progress with both sides arguing that the other side has no real interest in pursuing them. The only thing that is certain for now is that the war will continue.