Global Crisis Watch 174 – The End of the Post-War World 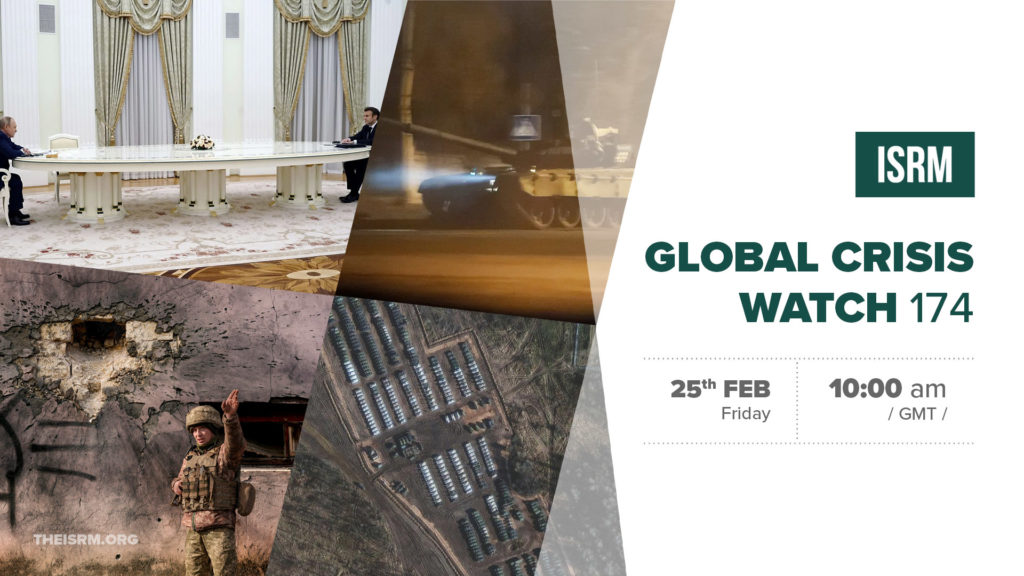 Almost exactly eight years after unmarked Russian soldiers, referred to as little green men appeared in Crimea, Russia started to move peacekeepers into Ukraine on Tuesday to protect two breakaway regions it just recognized. What came as no surprise after the theatrical stage play in the Kremlin on Monday is nothing short of an invasion of a sovereign state. The Washington Post was quick to call this the end of the post-War and post-Cold War world and the op-eds are filled with experts who underline the significance of this moment and why it could escalate further.

Monday started with a pre-recorded and most-probably scripted meeting of the Russian Security Council discussing the question of Ukraine. It was followed by an address by President Putin who seemed to have taken a page from Donald Trump’s playbook of long and insane rants. In the hour-long address, Putin constructed historical and geopolitical justifications to go against Ukraine. He emphasized the close historical connection between the people of Russia and Ukraine, argued that Ukraine would not exist without Russia and maintained the position that the 2014 Maidan revolution was a coup d’etat after which no legitimate government was formed. The speech could not have been more hostile towards to Ukraine if Putin had ended it by echoing Cato’s phrase concerning Carthage, with ‘Ceterum censeo Ukrainem esse delendam‘ (Furthermore, I consider that Ukraine must be destroyed). Putin also announced that he would recognize the two Russian backed breakaway regions in Ukraine’s Donbass region: Donetsk and Luhansk. Shortly after, he signed agreements including assurances to assist and protect them. Just two hours later, Russian peacekeepers were already enroute to Ukraine.

All of this has been constructed on a false narrative. What boils down to a blood and soil speech only serves as a justification to destabilize and weaken Ukraine and to continue what started in 2014 after the Kremlin backed Yanukovych regime was ousted from government. During this disruptive time, Russia illegally annexed Crimea and started a small-scale invasion of the Donbass region. Any involvement of the Russian military was denied, but it was clear to every observer whose operation it was. Diplomatic efforts gave hope that the situation could be stabilized and that the conflict could be solved through diplomatic means. The following eight years have been characterized by continuous combat, cyber-attacks and political threats, but the conflict turned into static background noise until Autumn 2021. Russia built up large troop numbers at the Ukrainian border to conduct military exercises as it had done many times before. This time though, it was different in terms of the threat and the military support structure. In a time of internal turmoil in the US, disagreement within the EU and NATO, and a pandemic that caused widespread civil protest, Putin decided that it was time to secure his legacy of creating a greater Russian Empire and to bring those countries back into the fold that gained independence after the end of the Cold War. During February, misinformation and false flag operations started to become more frequent. They ranged from military operations against the separatists to plans of genocide.

Diplomats and leaders worked tirelessly to resolve the tension and had hopes that Russia was serious in their claim of not wanting to invade Ukraine and were withdrawing troops from their border.

On Monday, February 21 2022, any pretence ended. As soon as it was announced that Russia would recognise the two breakaway regions it was clear that this was the precedent to move troops into Ukraine to defend the two recognized republics from impending Ukrainian aggression. After initial vagueness about which borders of the regions were recognized, Russian officials announced now that the area includes territory held by Ukraine.

The US and many European countries had announced that they would impose severe sanctions if Russia would take aggressive action. It did not take long for them to come into play. While the US imposed sanctions on Russian financial institutions and its elites, Germany indefinitely shelved Nord Stream 2, the undersea pipeline designed to ferry natural gas directly from Russia to northern Germany. Russia claimed that it was prepared for these sanctions and that they make no difference. Deputy Chair of the Security Council Dmitry Medvedev tweeted that in this brave new world, Europeans would pay €2000 per 1000m³ natural gas, more or less tripling current prices. Effective sanctions hurt both sides, but the Russian economy could implode under increasing restrictions. Western governments have made it clear that the costs for wanting to wage a war in Europe will mount with increasing aggression and that it is now on the Russian side to deescalate.

On Wednesday morning it was unlikely that talks would resume. President Putin had committed to his gamble and the ceasefire violations in Eastern Ukraine continued to grow. Ukraine started to mobilize its reserve troops and declared a state of emergency. President Biden called any further talks pointless. Early on Thursday, what many had feared now had become a bitter reality: the invasion of Ukraine has started, and it seems that there is now war in Europe.